Archangel Michael Monastery, Thassos Monasteries, Sights of Thasos
The monastery of Archangel Michael is located in the south eastern part of Thassos and is 33km far from Limenas. It is built on a cliff above the sea surface with a view of the Aegean Sea and Athos(Agio Oros). It is a nunnery depended spiritually on the monastery of Philotheos in Athos(Agio Oros). In the holy monastic community it is treasured a piece of the Holy Nail, part of the nails of the Crucifixion of Christ.

We do not know exactly the date of the monastery’s foundation, but there is a reference about it at an official paper of 1287. In 1835, some repairs took place as it is revealed on an inscription at the western side of the temple. The first nuns and a monk from the monastery of Philotheos settled in 1974 and worked very hard in order to transform the previously remote monastery.

The Holy Monastery of Archangel Michael made a great fortune from worshipers’ donations. Owing to an abalienated law in 1927, the property of the monastery was divvied to 72 peasants.. 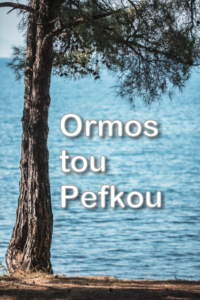